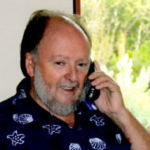 Peter was born in England during World War 2, and as a young child lived with his grandparents. His grandfather kept beehives and Peter was fascinated by them. Although he and his parents later moved to London, family holidays were always spent with the grandparents, and Peter loved to help his grandpa with the bees, and the chickens and the vegetable garden. When his grandfather died, Peter inherited 2 beehives in 1960.

However, Peter’s strong interest in nature and biology led to studies at London University and so the beehives were put aside during those years. He became interested in medical research at that time, and so after graduating with a degree in Chemistry and Physiology he started work at the Chester Beatty Research Institute in London working on the links between aerial pollutants and lung cancer. He furthered his studies by completing a doctorate in Biochemistry at Sheffield University, but the real attraction at that time was being able to escape the city and spend time in the nearby Peak District National Park

By the time his PhD was completed, Peter had decided to pursue a career closer to his interest in nature and so moved to South Australia where he worked as a Research Scientist with the Commonwealth Scientific and Industrial Organisation (CSIRO) in the Division of Horticultural Research. It was there that Peter and Jenny met through their common interest in scientific research. Although not actively beekeeping at this time, the links to the importance of bees to horticultural production became firmly established in Peter’s knowledge base, so when they moved to Western Australia in 1973 to further their respective careers, Peter was very soon managing beehives again as a hobby. The business Homestead Honey was established in 1975 and a virgin ‘bush’ block was acquired near Gingin as a base. Meanwhile Peter worked at the University of Western Australia Medical School and Jenny worked as a research librarian at CSIRO. As their respective careers grew, so did their family of 3 children and lots of beehives! Staff were employed to work the bees during the week, and weekends were spent moving bees to new locations or extracting honey and selling it at markets in the city. Jenny’s library career was on hold as the children grew, until eventually she was able to resume and became the Science Librarian at Murdoch University. By now the business had grown and moved to a bigger ‘bush’ block alongside the Moore River National Park at Orange Springs, and Peter had resigned from his medical research position and was now full-time managing the bees and honey business.